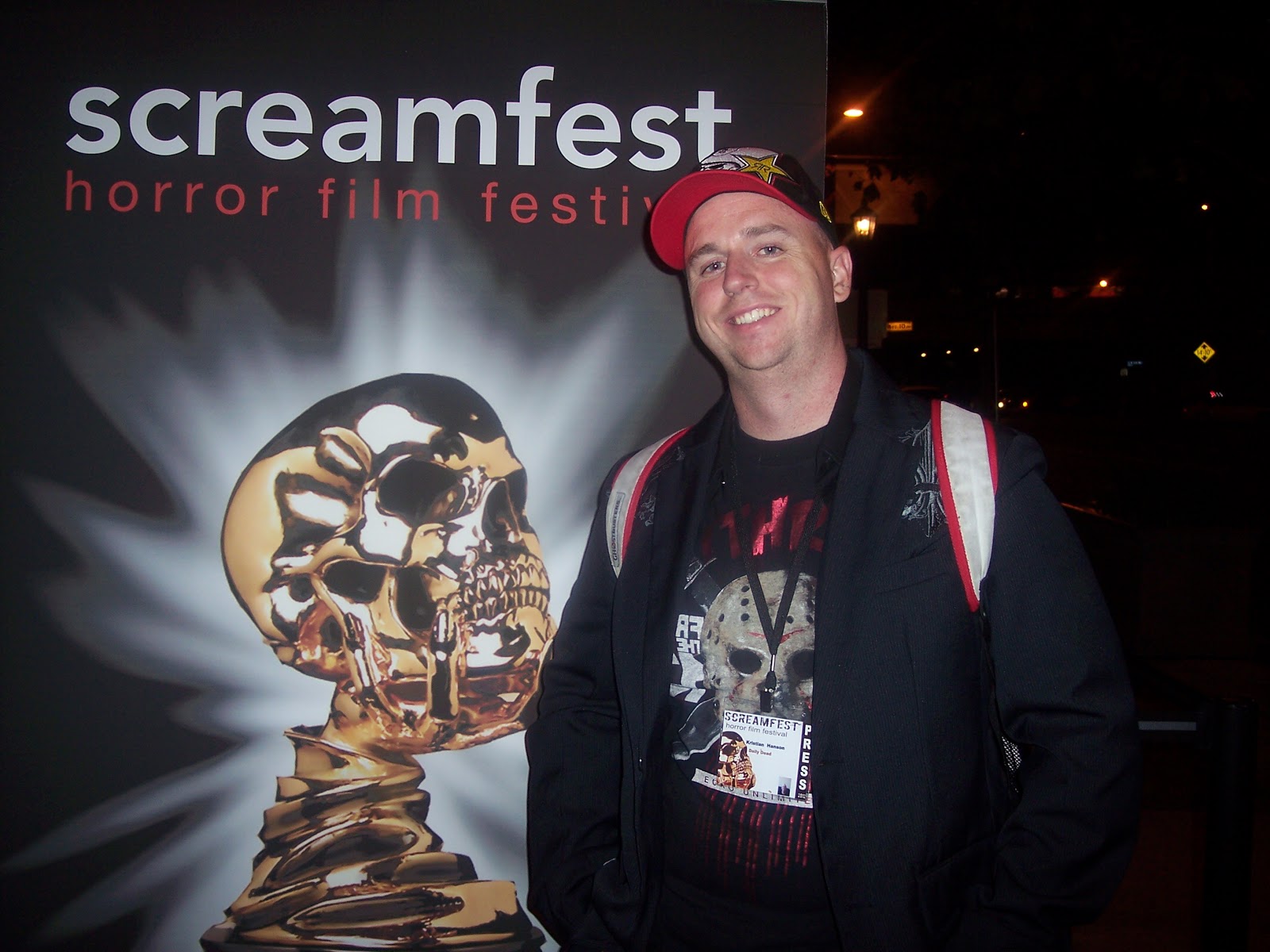 -First off, I'd like to thank you for your time, so secondly would you like to tell readers a bit about your project 'Sledge'?

I appreciate your time as well. When it comes to SLEDGE, I wanted to create something that brings us all back to the golden age of slasher films. I know people say that they wish the 80’s were still here, but instead of living in the past, why not start making films for now? Sledge fits the storyline of a slasher, but is a lot of fun and I think fans of horror or even comedy films will get a kick out of what we have made.

-Did you draw any inspiration from the plethora of slasher killers?

If I said I didn’t, I know that would be a lie. I grew up with slashers like Freddy, Chucky, Leatherface, etc. When I was creating Adam Lynch, I wanted him to be different from those guys in the way his personality was but at the same time, bring fear into people that don’t watch horror films.

-Who is your personal favourite slasher killer?

Personal favorite would have to be Freddy Krueger. When I was six years old I had my tonsils out, and my father took me to the toy store. He told me I could buy any toy for $30 or less, so I found a pull string talking Freddy Krueger doll. The one question I remember him asking me was “How do you know who this guy is”, and being six, I said “mom showed me” and a fight probably ensued, but I left with my first ever horror collectible that I still have to this day.

-What is the most memorable kill in a slasher film, and how do you propose to do something either as effective/out do it?

I am a huge Adam Green fan and love Hatchet, so it has to come from that film. It is where the lady gets her head ripped off from the top of the jaw. BJ McDonnell who was the lead camera operator did a phenomenal job filming that scene that you can’t see the separate cuts of the film.

-Where did you get the inspiration from for the character of Adam Lynch?

Honestly I just wanted to create something that was fun and that was my own. I sat down to write the script after my wife gave me the idea to fly up to upstate New York to film Sledge with my Co-Director John Sovie II. As I sat and began to type, I had this character flash in front of my eyes who loved horror films, comic books, video games just like myself. What if he believed he was inside that world, where once he kills the kids, they get reset kind of in a way all of the Friday the 13th films do.

-What sets him apart from generic slashers and will make him, as I hope, a legend like Freddy or Jason?
The jokes and comments he makes. Adam Lynch is someone that I think fans will actually enjoy and will hopefully enjoy his one liners. He makes a lot of original jokes but at the same time he recites lines from previous films or makes sounds from video games when killing people. I really believe gamers, horror fiends and comic book geeks will enjoy it. I honestly say that because I am all of those and I know it’s something I would enjoy.

-Where do you think the horror genre is headed?

The genre is headed in a positive direction when it comes to the independent crowd. There are films constantly coming out that are amazing like Martyrs, Tucker and Dale vs. Evil and others. These are not big studio movies but fans are finally getting to see them because of ON DEMAND. As for the big budget industry, we can all see that Remakes are their bread and butter.

-How much has the internet and social media helped you as a filmmaker?

Internet and Social Media has made it easier for fans to reach out to their heroes and help them. Adam Lynch is named after Adam Green and Joe Lynch as a thank you to the both of them for helping me out when I wanted to make a film. I had met them both on a few occasions and when I decided to make Sledge, I contacted them via Facebook and Twitter and they were kind enough to write to me and give me incite on what to do and what not to do. Also, it is a great way to promote yourself when you are an Independent film maker because you don’t have that publicist or agent that will do those things for you. With the voice of the fans is how Sledge is getting out there and I cannot thank them enough.

-I'm sure like many other horror fans you have an opinion on remakes, care to share?
When it comes to remakes, I do not hate them and I do not love them. I say that because I do really enjoy some of them, like the Texas Chainsaw remake with Jessica Biel. I honestly love that film besides the creepy kid with the screwed up teeth. Now, I have to admit, I really didn’t like the Nightmare on Elm Street remake because of the lead characters and their Emo frame of mind. I honestly say enjoy what we get and if you don’t like it, say so. If you do enjoy it, like I am hoping to enjoy the Evil Dead remake along with Carrie, go out and say so. Don’t be ashamed to say you like a horror film because you think you won’t be considered a real horror fan, unless you say you like Twilight, than just keep that to yourself.

My all-time favorite film horror or not is An American Werewolf in London, followed by Jaws. When it comes to 80’s films, I love John Carpenters The Thing (not the crappy prequel that was really a remake), Hatchet, Halloween, The Nightmare on Elm Street series, Hellraiser series. You name it, I more than likely have seen it and enjoyed it.
As for the top horror films of the last decade, I would have to say Hatchet 1 and 2 are the top of the list along with Frozen. Yes, they are Adam Green films, but again, I am a big fan of his and what he does. Next, I would have to say Martyrs is another film that I enjoy thoroughly because you just don’t know what to expect through it all, and finally, Paranormal Activity 1, 2 and Insidious. I think those three films were amazing when they came out, but as I have seen with 3 & 4, I lost interest. The Saw series was also great with its many ups and downs, but I overall enjoyed that series too.

-Who were your early inspirations, was horror your first love?

My early inspirations would have to be John Landis. He is the perfect blend of Horror and Comedy when it comes to An American Werewolf in London. Also, I love Wes Craven and what he was able to create along with John Carpenter. Mr. Craven was one of the first people I had the pleasure of meeting when I moved to California, and he couldn’t have been nicer to a nervous fan boy.
-What was your first horror movie, how did that effect you wanting to see other horror movies and be a part of the genre?
The first horror movie I saw was Chucky when I was five years old. I still remember the nightmare where I woke up and saw Chucky everywhere inside of my room. However, according to my oldest brother, I have been watching horror films since I came home from the hospital after I was born. I have loved horror since I was born and will always be my first love.

-I read that you bang out a script in 4 days, very impressive. Could you give us any information on future projects?

My future projects are kind of up in the air. We have some surprises to throw at people with a new take on Vampires (they don’t sparkle) along with Zombies and a werewolf script I wrote off of my book Fat Kid’s Wolfy Revenge: Not for the Weak hearted or Mature minded. My book is a horror comedy that I wrote as if I was still seventeen and ran into a werewolf tearing all the dumb girls apart at my high school. I would love to be able to make that into a feature film with all of the intricacies that are inside of the book. I created a lot of memorable death scenes that I would love to display on screen, including a breast implant regurgitation from the werewolf as he talks crap to her and kicks her. That is my kind of humor, and I hope you are all ready for a fun ride. Please feel free to contact me on twitter at @CraptasticWritr or LIKE us on facebook at www.facebook.com/Sledge If you like the page and message the page I will respond. Thanks again for the time, I do appreciate it. 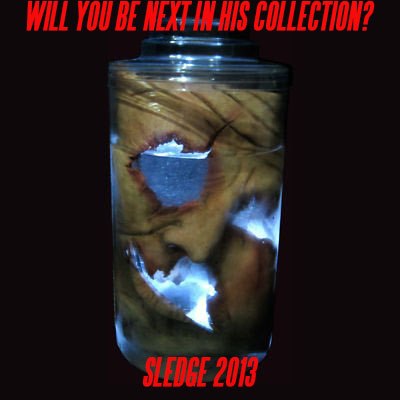