It's Mothers Day here in the UK, and to celebrate I am watching the 2010 remake, Mothers Day.

I watch Independence Day on July 4th, Die Hard at Christmastime, and Planes, Trains and Automobiles at Thanksgiving. 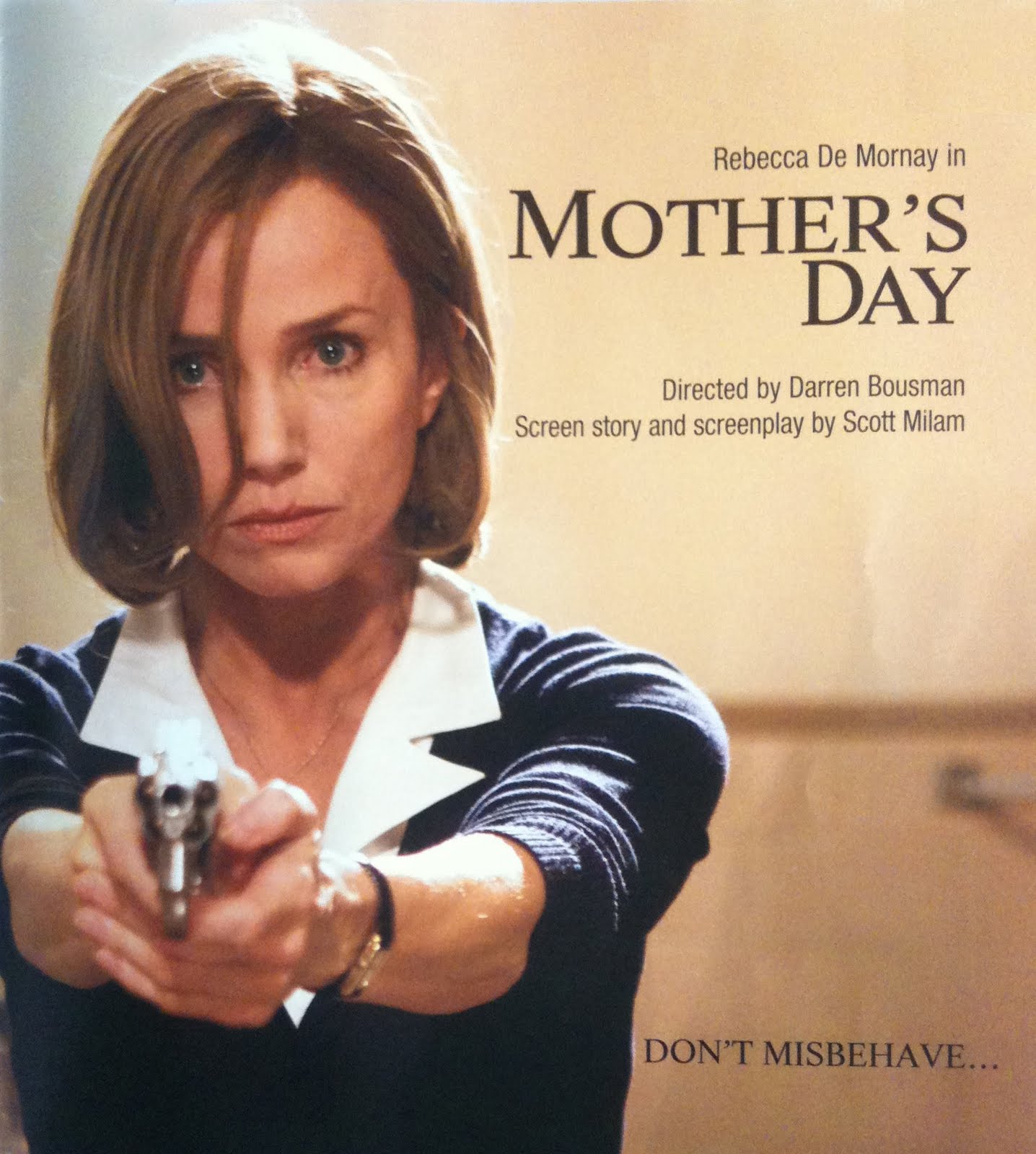 This viewing is only my second viewing, the first being at the cinema. I missed the opening of the movie the first time due to the projectionist being crappy at their job. The cinema was packed and it seemed only me and my friends could tell that the ratio was all wrong. We nipped out, talked to staff, got it fixed and came back to the movie looking correct.

I wonder how long it would have taken any of the rest of the audience to notice or realize it was wrong.

So back to the movie itself.

So a bunch of friends are having a small party, and boom, their home is invaded by the Koffin family, the previous owners of the home.

It's got quite the horror sci-fi geeky cast...

In the title role of Mother is Rebecca De Mornay. 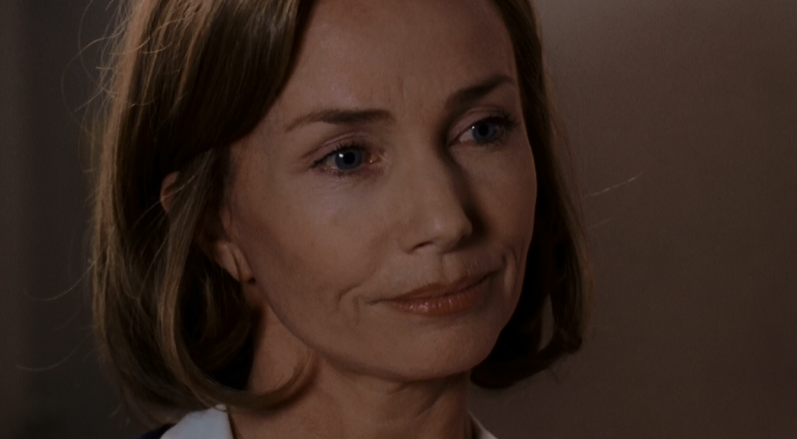 She's the quietly psychotic head of the Koffin family. She has pushed her neurosis and troubles onto her children, each one an extension of her. I wouldn't call her or her family "evil" because as the movie unfolds people on both sides of this hostage situation do things of questionable morality. 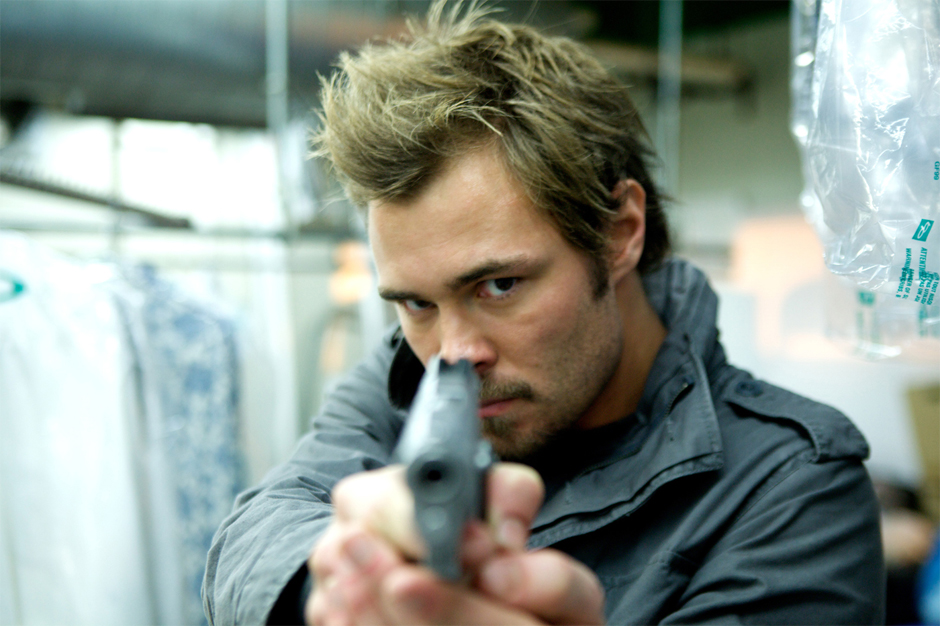 He assumes the role of leader. He ends up taking Beth, the new owner of his childhood home, to her shop to pick up cash from the safe.

Along the way they encounter two girls, played by horror alum A.J Cook and Alexa Vega. Whilst threatening the two girls with his gun, he says he will let one go. 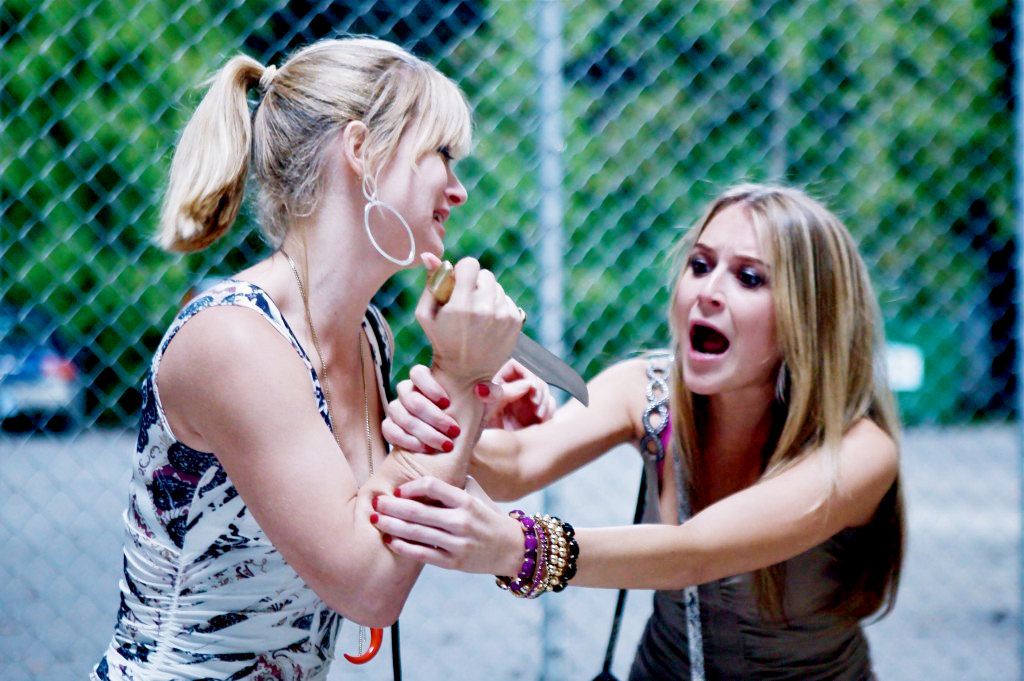 He will let the girl who will stab the other girl go. Scenarios like this play out a lot in this movie, the family forcing the hand of those "innocent" people they encounter.

The middle brother, Addley,  is played by Warren Kole 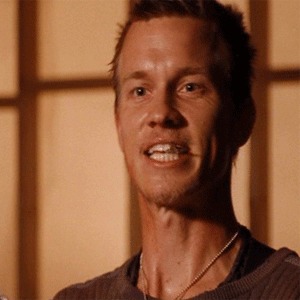 Addley is the unprectable, unhinged classic middle child. He seems to be playing up and acting out to get attention, but always on the heels of his older brother Ike. Trying to live up to his older brother, become the leader.

Next is the baby of the Koffin family, Johnny, played by Matt O'Leary. 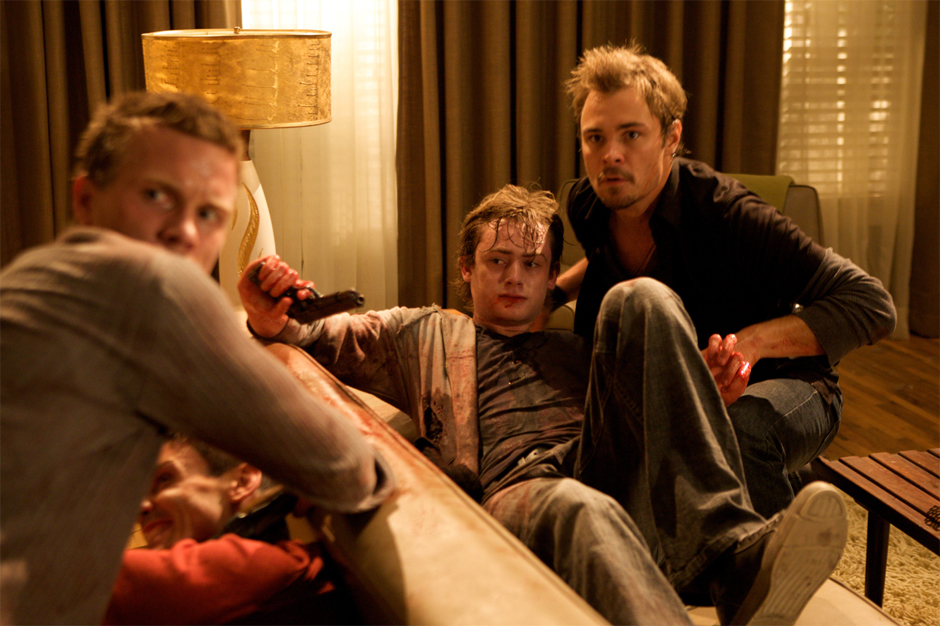 I'm gonna call him careless and clumsy because he's the youngest, and because he gets injured and needs to be cared for by one of the Ashmore twins.

As he lays dying he's crying in pain to his mother about how he's never had a woman. Mother goes ahead and gets her boys to get her youngest a woman. How they go about this? Have two of the men they have hostage battle it out, loser has his woman raped by the dying Johnny.

Then there is the fourth sibling, the only girl, Lydia played by Deborah Ann Woll

She is quiet, and hides away literally behind her hair, in her clothes. Her interactions with one of the hostages, a doctor who is caring for her dying brother brings her out of her shell. But was she better left in it?

She, along with the rest of her siblings, have been brought up in a confined and closed off world. Everything bad that may have happened to her mother is channelled into her. Every bad thing that her mother thinks could happen to her only daughter is what makes her build up these walls around herself, making her a scared insecure woman.

Now we have the woman who bought the house. Jaime King as Beth. 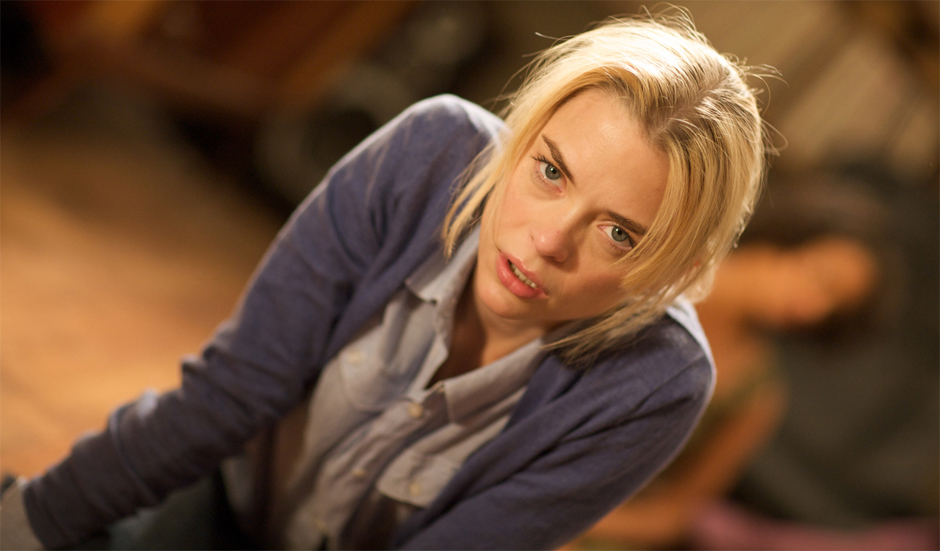 Arguments could be put forward that every shitty thing that happens to her friends... she could have prevented from the start... but then her actions serve her. She puts her own survival, and the survival of her unborn baby ahead of everyone else. But then what would you do in her situation?

Beth had been stashing the money that the family is looking for from her cheating husband and wants to use it to start a new life.

Her husband, Daniel, is played by Frank Grillo. 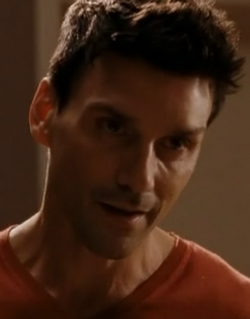 When he and his wife Beth are questioned about the money by Mother, she believes Beth when she says she knows nothing about it, but she does not believe Daniel. And neither did I.

You can tell something is off about this guy, but it wasn't the money he was hiding, it was his affair.

To try and get information about the money out of Daniel, Mother gets her sons to break his hand with a pool ball. This is the scene where on first viewing I thought he was cheating. Beth screams out for their captors to stop smashing in his hand, and the only other woman at the party to cry out is Julie. 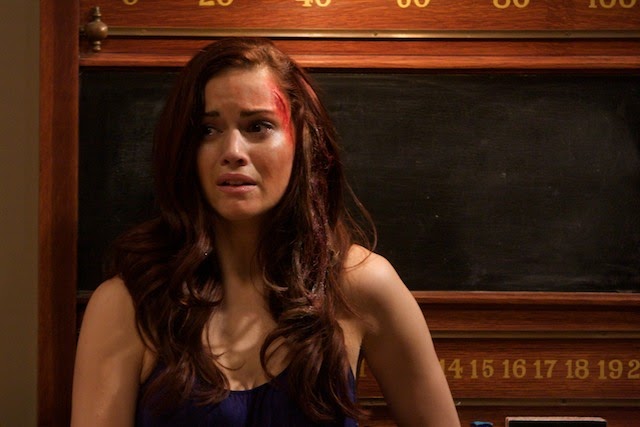 The other friends consist of two couples. The Jacksons, played by Lyriq Bent and Kandyse McClure. 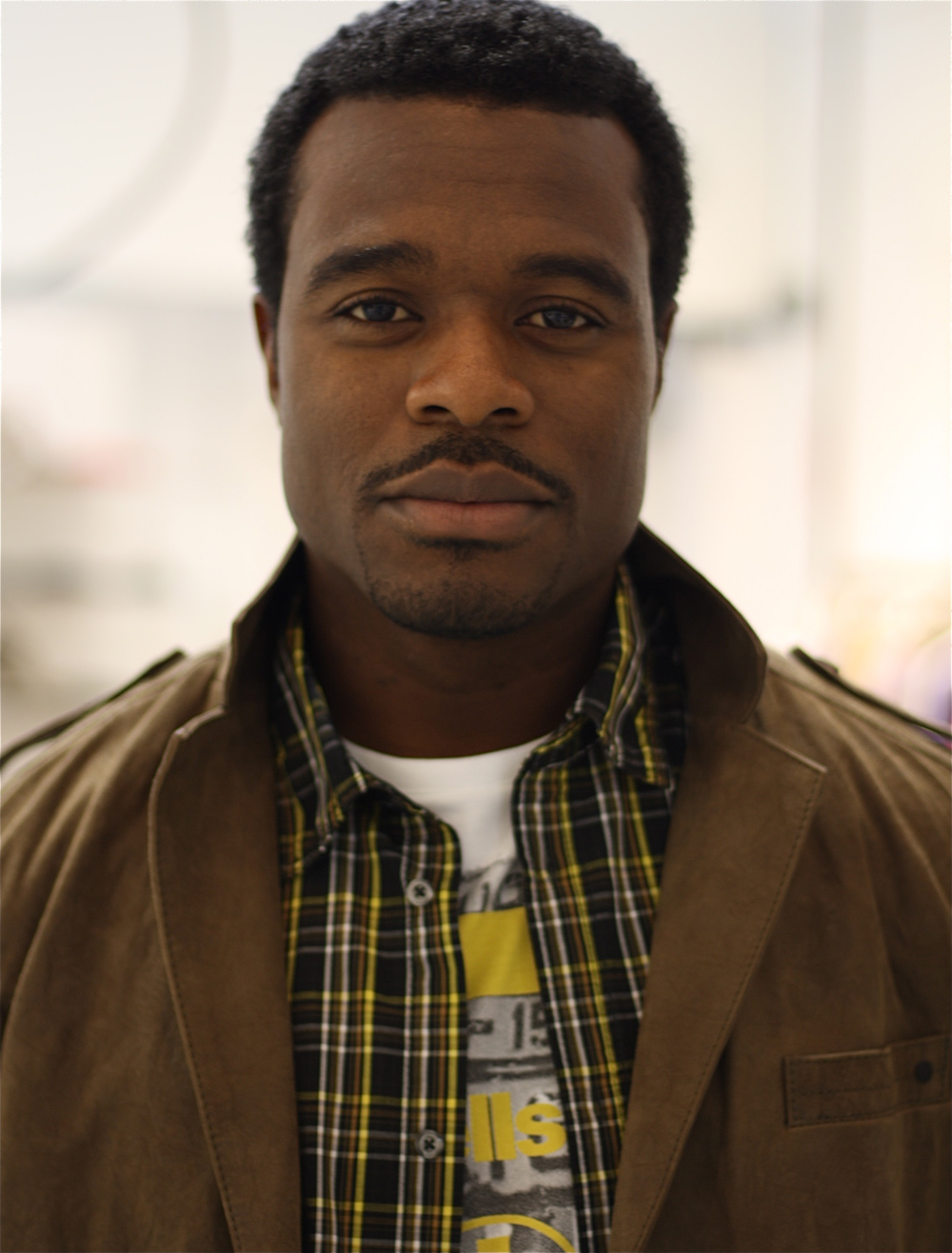 Treshawn fights for her to not be raped, smashing in a man's face who before hand he was calling a friend and once the scenario is put to the two men, to fight for which of their women won't get raped, they say they are not even friends.

Treshawn is accused of not learning his lesson, and told he never listens to Mother. His punishment, to have boiling water poured into his ears. Later as he's trying to escape he accidentally shoots his wife. It's so sad, not only cause it's obviously sad but because she had escaped but Daniel made her come back otherwise everyone else would get shot.

The other couple are not married but he is planning on proposing to his girlfriend. Dave Lowe, played by Tony Nappo, and Annette Langston played by Briana Evigan. 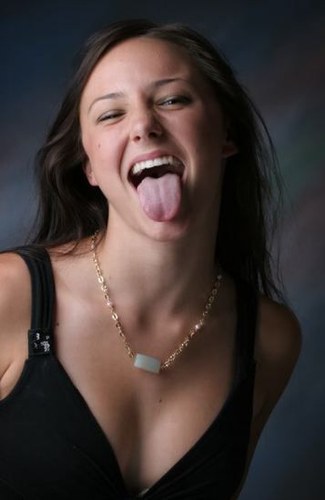 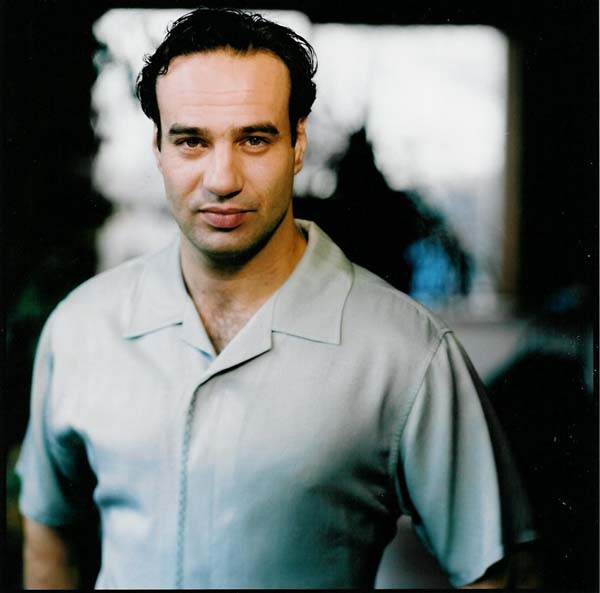 He winds up with his head blown off, the effect looks amazing.

Anywhos this certainly gets a recommendation from me, as long as you can stomach it, and are willing to face some harsh scenes and question everyones morality in this movie, then have fun!